China will lift the seafood sector from its mid-January blues by lowering import tariffs for a host of popular seafood products, including coldwater shrimp, crab, pollock and six species of frozen tuna.

China will lower tariffs by 3-7% on ten different seafood products, saving importers millions of dollars each year in taxes. The lower costs should spark increased demand as savings are passed on to Chinese consumers.

The new tariff regime will come into effect on Jan. 1, 2017, according to the document titlted “MFN Provisional Tariff Schedule for Imported Commodities”, published by China’s Ministry of Commerce (MofC) just before Christmas.

It will be applied to imports from countries not already benefiting from preferential rates (such as through free trade agreements).

Currently, reduced imports tariffs are applied to 17 seafood products in total (see full list at the end of the article). The reduced tariffs are described as “temporary” and could be returned to normal levels at any time, according to China’s MofC.

Importers of pollock (HS code 030367) could reap the biggest benefits from reduced tariffs. China imported $740 million worth of pollock in 2015, making China by far the world’s largest pollock importer, according to International Trade Center (ITC). Tariffs on pollock imports will be lowered from 10% to 5%.

Most of these pollock imports are processed and then re-exported, and, therefore, not charged import tariffs in the first place.

However, China’s domestic whitefish market is growing rapidly. A number of the country’s largest re-processors claim to sell as much as 50% of whitefish products to the domestic market.

Other frozen whitefish imports already benefit from reduced tariffs, such as cod (2%), herring (2%), plaice (2%), Atlantic halibut (5%) and cutlass fish (5%). Tariffs for cod, herring, plaice and Atlantic halibut have been under ‘temporary” lowered tariffs for at least the past five years.

Import tariffs will be lowered on six species of frozen tuna as of Jan. 1, too. Tariffs for albacore, yellowfin, bigeye, Atlantic bluefin, Pacific bluefin and Southern bluefin will be reduced from 12% to 6% (see table below for HS codes).

China’s fishing fleet already catch significant quantities of tuna, increasingly landing it at Chinese ports rather than Bangkok, to supply the domestic market and process for export.

Reduced tariffs for tuna will benefit foreign companies looking to export to China. It comes off the back of a spate of deals and new product launches targeting the Chinese market, although most of these deals are for canned tuna, not frozen.

In 2015, China imported around $30m of frozen tuna, including $23m of frozen yellowfin, according to ITC.

Import tariffs for coldwater northern shrimp (pandalus borealis) will also be reduced as of Jan. 1, down from 5% to 2% (HS code 03061612). Although a small decrease from already low levels, importers will make significant savings; China is the world’s biggest importer of coldwater northern pandalus, with imports worth $162m in 2015, according to ITC.

Canadian suppliers will benefit most; the country exported $104m worth of coldwater pandalus to China in 2015.

Tariffs will also be lowered for frozen crab (HS code 03061490) imports, down from 10% to 5%, giving a potential boost to suppliers in the US and Canada.

According to China’s MofC, products traded under the HS code are defined as “frozen golden king crab (king crab)”. The US International Trade Commission (USITC) has a less specific definition of “Other”. However, USITC excludes Dungeness crab, Snow crab and, perhaps surprisingly given China’s definition, King crab from the category.

In 2015, China imported a total of $171m worth of frozen crab in this category, with most imports from Canada ($90m) and the US ($40m), according to ITC. Most imports will go for processing and then be exported, exempting the imports from import tariffs.

China will also reduce tariffs on live crab imports (HS 03063399) from 14% to 7%. This would be of much greater benefit to importers, as nearly all imports of live crab are consumed domestically.

However, Undercurrent News is unsure about what type of live crab this code refers to, or even if it refers to crab at all.

In 2015, China’s imports of unfrozen rock lobster and unfrozen lobster homarus were worth a massive $342m and $187m respectively. New Zealand was the biggest origin of rock lobster, exporting $219m worth to China alone (imports from New Zealand are eligible for zero tariffs due to the two countries’ FTA). Canada and the US exported $102m and $84m of lobster homarus to the country.

However, besides the lack of clarity over tariffs for crab, there is also a possible mistake in the MofC document regarding import tariffs for these two products.

Undercurrent could not find either of these HS codes in ITC or USITC systems. It is therefore possible that they in fact refer to HS code 03062190 and HS code 03062290, ie. unfrozen rock lobster and unfrozen lobster homarus, and the reduced tariffs will simply be extended into 2017.

However, given Chinese customs has applied import regulations and arbitrarily and chaotically in the past, importers and exporters should inquire ahead of their next Chinese shipments to confirm the new tariff regime.

China’s Administration of Quality Supervision, Inspection and Quarantine, did not responded to Undercurrent’s request for clarification at the time of publishing. 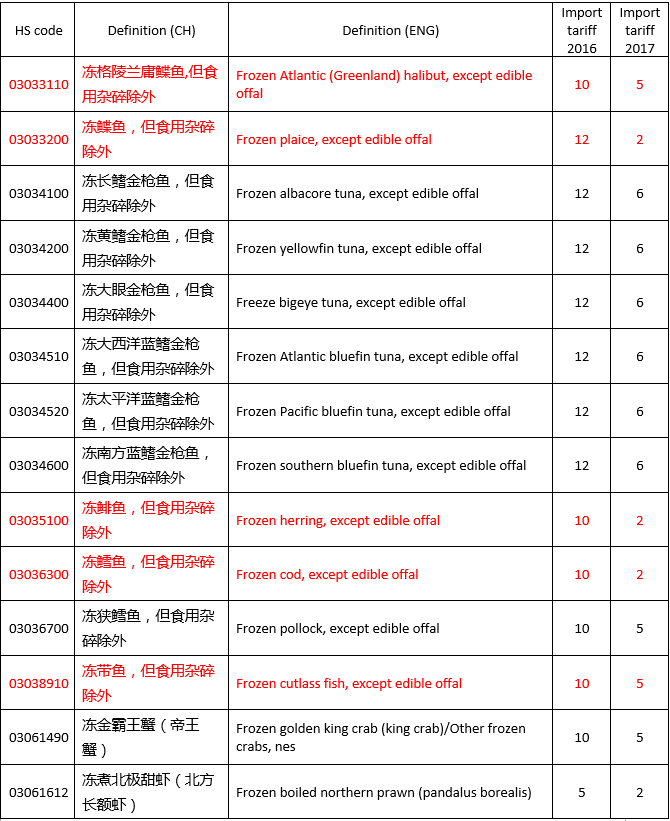