http://www.undercurrentnews.com
Significant changes are afoot in the world’s largest seafood market this year, according to four market indicators recently published by China’s ministry of agriculture (MoA).

The indicators were published last week (June 15) by the MoA in a monthly market report on agricultural products in China. The key seafood price index — based on prices of 30 different seafood products sourced from 67 different wholesale markets across China — is published alongside prices for dairy, poultry and chicken eggs.

Alone, the indicators are worthy of market analysts’ attention; together they may herald far-reaching changes on world seafood markets.

The rise in the seafood price index is particularly noteworthy; In May, average prices for seafood — CNY 22.25 per kilogram ($3.27/kg) — were higher than at any point in the past six and a half years since when MoA data is available, while the scale rise has also been unprecedented for the period.

While the MoA does not make a connection, imports have also surged higher than at any time in the past five years — the last major surge was in Q2 of 2014 when imports were 17% higher compared same same quarter of 2013, according to International Trade Center.

Meanwhile, as Chinese consumers reach for more expensive shrimp, crab and scallops at supermarkets across China, this could be raising the seafood price index. But as prices for other animal proteins compare more favorably, this should result in a drop in seafood consumption in China.

According to MoA, in May China’s seafood price index was CNY 22.25 per kilogram ($3.27/kg), 31% above the same period last year. Seafood prices surged in the run-up to Chinese New Year — the busiest period in the calendar year for seafood trading — and continued rising in the months following (see above graph).

And prices are higher across the board; in May average prices for crustaceans were up 22% year-on-year; molluscs, 45% y-o-y; and freshwater fish, 13% y-o-y, according to MoA.

As China’s massive aquaculture sector enters the seasonal peak in production, prices tend to drop. This year fishmeal and other feed prices are lower, too, notes MoA.

However, MoA still reckons prices will remain stable at current highs, with “a slight upwards trend,” it said.

MoA does not draw conclusions or expand much on the market dynamics at work, but limited supply is one factor, it said.

The ongoing fishing moratorium, which has seen all fishing in Chinese waters banned from May until up to September, and “relatively less” aquaculture production, have both limited fish availability.

“In June aquaculture production enters its seasonal peak, [but] output is relatively less. [Also] currently the country is in the moratorium period, limiting availability of fresh fish at markets.”

“Compared with the year-on-year levels the increase in seafood prices is obvious,” it said.

As prices have risen imports have surged.

Again, the increase is unrivaled in the past five years — the biggest increase was in Q2 of 2014, when imports surged 17.3%.

In recent months, Undercurrent News has reported on China’s appetite for everything from Argentine shrimp and New Zealand lobster, to Australian lobster and Vietnamese pangasius.

Another important indicator is that at Chinese wholesale markets, traded volumes of more expensive crustaceans and molluscs, in particular, have increased, while trade of cheaper freshwater fish, such as species of carp, has decreased.

During the month of May, at the 67 wholesale markets surveyed, average daily traded volumes of crustaceans were up 116% year-on-year, to 44.6t. Traded volumes of molluscs were up 37% y-o-y to 272.7t.

This could be behind the increase in the seafood price index, although MoA again does not make the connection.

Average prices of crustaceans and mulluscs were much higher — CNY 175.8 per kilogram and CNY 16.7/kg respectively — compared with freshwater fish which was on average CNY 15.09/kg.

Drop in prices for other animal proteins, feed

But while prices for seafood are increasing, prices for other animal proteins are mostly falling. As Chinese consumers look to fill their shopping baskets, seafood is becoming a more expensive option. 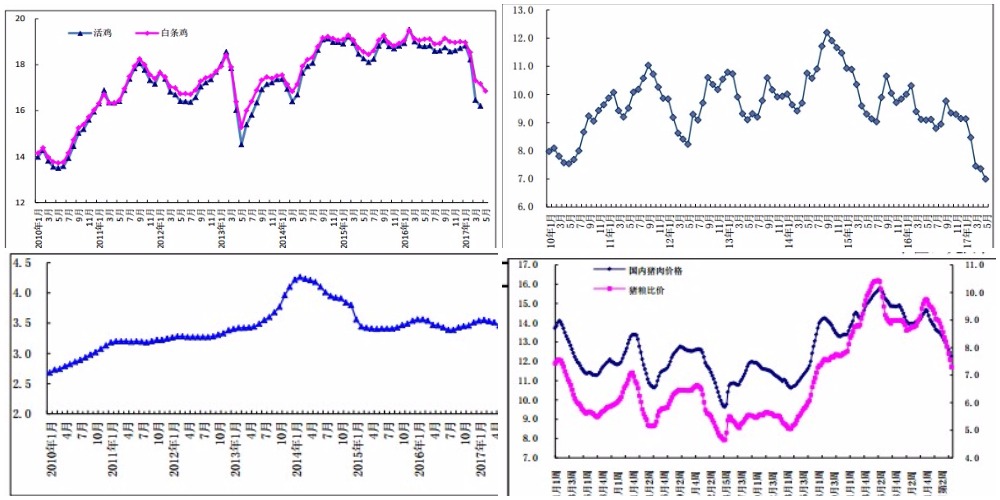